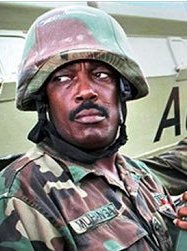 IS THIS ELECTION AKUNAMUKYEZO?, President Museveni has appointed Maj. Gen Kayanja Muhanga as the Kampala joint security operations coordinator reporting directly to the Commander in Chief.

Gen. Kayanja will essentially man Kampala security during and after the national polls. On January 14th 2021 Ugandans will vote for the President and Members of Parliament and local council leaders days after.

UPDF deputy spokesperson, Lt Col Deo Akiiki, told us that Maj. Gen Muhanga will be the overall operations coordinator for all security agencies.

“This means he will be the link between joint operations of the police force, the military and intelligence agencies,” Lt Col Akiiki said at the weekend. 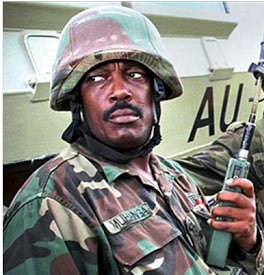 At the time of his appointment, Maj.Gen Muhanga (in photo above) had just returned from a one-year course at South Africa’s National Defense College. He has previously served as the commander of Uganda People’s Defence Forces (UPDF) 2nd Division based at Makenke, in Mbarara District.

For more than two years, Muhanga was the UPDF Contingent commander in Somalia. During his tenure, he battled Al-Shabaab militias that had made AMISOM operations almost impossible with Improvised Explosive Devices commonly known as IEDs.

Maj. Gen Muhanga’s assignments have started immediately and it is reported that he coordinated operations for the New Year celebrations in the Kampala metropolitan area.

President Yoweri Museveni has of recent put more emphasis on the Kampala metropolitan area that had almost been taken over by what he said violent criminals who had made some areas no-go zones for police.

Since the introduction of Closed Circuit Television (CCTV) security cameras, a command centre for both the military and police was established at the Kampala Central Police Station.

A senior police commander intimated to us that Maj.General Muhanga has been brought in to beef security coordination as the country heads to January 14 polls.

“It was resolved that all operations during the election period should involve military and police. There is a team of military and police personnel already prepared purposely to deal with all election-related security threats,” a senior police officer said.

Maj Gen Kayanja Muhanga joins his fellow army men who are in charge of Kampala.

In his New Year’s address, President Museveni said he had deployed highly trained units that have been fighting Allied Democratic Forces (ADF) at the DR Congo border and the Al-Shabaab militias in Somalia to deal with security operations in areas which had been regarded as no-go zones for the “weak, corrupt police.”

He said part of their mission is to deal with hardcore criminals who were allegedly being used by some opposition politicians to intimidate civilians and wreak havoc in Kampala and other surrounding areas.

Security deployment is essential in especially countering hooligans who want to disrupt elections during and after the polls in Kampala and generally in the country.