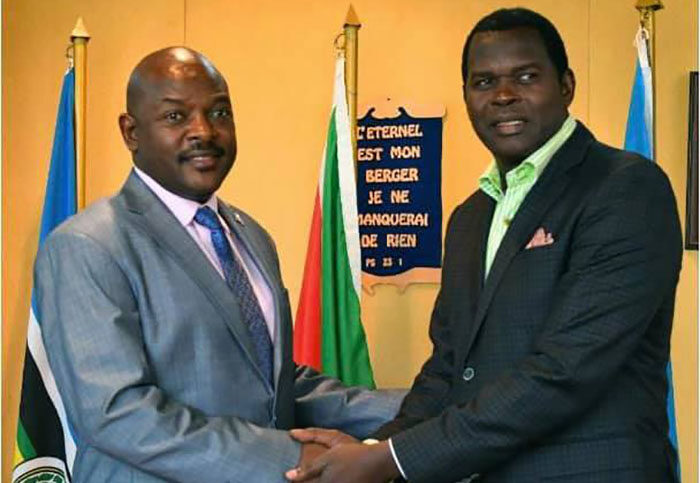 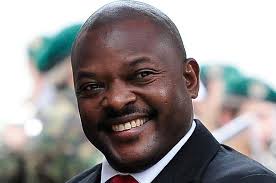 Pierre Nkurunziza (in photo above) who has died unexpectedly aged 55, was the outgoing president of Burundi whose 15-year-rule, particularly towards the end, was marked by brutal repression.

In 2015, Nkurunziza’s decision to run for an unconstitutional third term led to an outbreak of protests and violence that spread across the country. He responded with brutal violence. Over the next two years, his youth-led militia group, known as the Imbonerakure, as well as various state security forces, killed more than 1,200 Burundians in an attempt to quash street protests. Four hundred thousand more fled the country. A born-again Christian, Nkurunziza spent much of that time organising prayer meetings.

When donors cut aid, he retaliated by barring most foreign media outlets from reporting inside Burundi. When the international criminal court (ICC) opened an investigation into crimes against humanity in 2017, he responded by withdrawing Burundi from the Rome statute; the first nation ever to do so. In 2019, he went a step further and shut down the UN’s human rights office in the country after 23 years, claiming he had made sufficient progress in human rights. 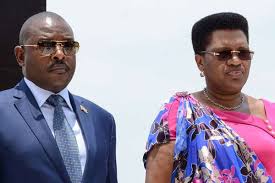 Yet when Nkurunziza first came to power following the 1993-2005 Burundian civil war, which pitted Hutu rebels against the Tutsi-led army, he had seemed genuinely committed to the ideals of peace and democracy. As the leader of the CNDD–FDD (National Council for the Defence of Democracy – Forces for the Defence of Democracy) Hutu rebel group, he had begun negotiating a peace deal in 2001. Two years later he signed the Arusha agreement, which ended the civil war, in which 300,000 people died. He transformed his rebel group into a political party and joined the transition government as a minister for good governance.

In 2005 Nkurunziza became president after his party won the elections by a landslide. A year later he lifted a curfew that had been in place since 1972. In 2007 Burundian soldiers joined an African Union (AU) peacekeeping force in troubled Somalia. The Paris Club group of creditors cancelled Burundi’s debt in 2009.

But after being re-elected with 92% of the vote in the 2010 poll, which was boycotted by many opposition candidates, Nkurunziza became increasingly authoritarian, power-hungry and intolerant. In 2014 he even banned jogging out of “fears it could be used by his opponents as a cover for subversion”.

Burundi was inching so close to another Hutu-Tutsi conflict that in 2016 the AU approved a pre-emptive deployment of a 5,000-strong African Prevention and Protection Mission in Burundi, which has yet to be deployed because Nkurunziza objected to it.

Colonisation has produced many crises that continue to haunt post-independence Africa but few have been as destructive as the Hutu-Tutsi divide. In neighbouring Rwanda in 1994 it fuelled a genocide in which 800,000 mostly Tutsis were killed by the Hutus. Twenty years earlier, in Burundi, it led to a wave of mass killing of mostly Hutus by the Tutsi-led army following a failed Hutu coup in 1972. Experts estimated that more than 100,000 people were killed.

Like Rwanda, the 1972 killings affected Burundi so deeply that it has become a defining political factor. Almost all recent Hutu leaders, including the country’s first democratically elected president, Melchior Ndadaye, whose assassination triggered the 1993 civil war, was a 1972 refugee. Nkurunziza’s father, Eustache Ngabisha, a former member of parliament and governor of Ngozi and Kayansi provinces, was a victim of the 1972 ethnic killings. Nkurunziza was eight years old at the time of his death. 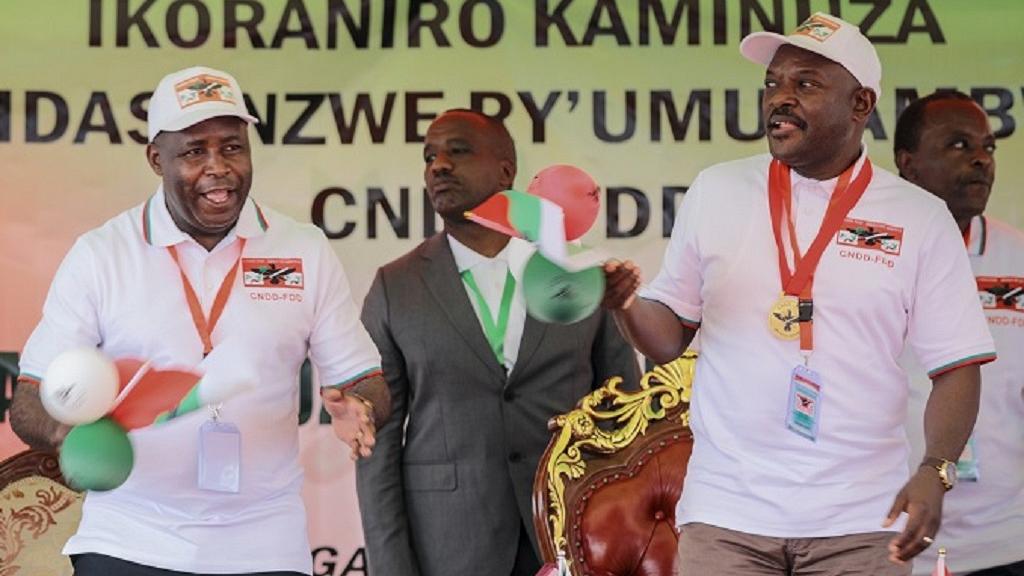 Nkurunziza with officials in Burundi.

Born in Ngozi, Nkurunziza was the son of Ngabisha and of Domitille (nee Minani), a Tutsi assistant nurse. After his father’s death, his family moved to Gitega, where Nkurunziza attended Athenée de Gitega secondary school.

A fitness enthusiast and keen footballer who in later life owned his own team, Hallelujah FC, Nkurunziza studied physical education at the University of Burundi. After graduation in 1990, he worked as a high school PE teacher at Muramvya high school. He married Denise Bucumi, who later became a pastor, in 1994.

The following year, while working as a lecturer at the University of Burundi, in Bujumbura, Nkurunziza was shot at during a Tutsi attack on the campus, which killed hundreds of students. He joined one of several rebel Hutu groups, CNDD–FDD, as a soldier. Two of his six siblings were killed after civil war erupted in 1993 and three others died while fighting with CNDD-FDD. By 1998 Nkurunziza was promoted to deputy secretary-general of the group, and in 2001 became its leader.

Following the violence that accompanied his 2015 unconstitutional re-election, his party eventually persuaded him to step aside to appease the growing tension in the country. His fellow party member Evariste Ndayishimiye won last month’s presidential election. Nkurunziza was elevated to the status of “Paramount Leader and Champion of Patriotism”, a title that came with a $535,000 retirement package and villa.

His cause of death was officially given as a heart attack, yet many suspect it was Covid-19. Ten days before his death, his wife was airlifted to Kenya for treatment for coronavirus symptoms, according to the Daily Nation. Nkurunziza had refused to introduce any social distancing or lockdown rules. When World Health Organization officials questioned his government’s coronavirus statistics earlier this year, he expelled them.

He is survived by Denise, by five children, Kelly, Kevin, Jonathan, Naomi and Dorcas, and a sister.

Lead pastor of Miracle Centre Cathedral – Rubaga,(Kampala- Uganda,  (Robert Kayanja above in photo) both through his social media account and in a service at channel 444 has paid tribute to Burundi’s President Pierre Nkurunziza who died after suffering a heart attack.

“It is with profound shock and disbelief that I have learned of the passing of His Excellency Pierre Nkurunziza, former President of the republic of Burundi,” Pastor Kayanja remarked.

“He has been a dear and very close friend, a great man of God and a great revivalist of our times, especially for the nation of Burundi. He broke the curse that dogged Burundian Presidents, as none of them could exceed three years in power, and led Burundi for a full 3 terms,” he said.