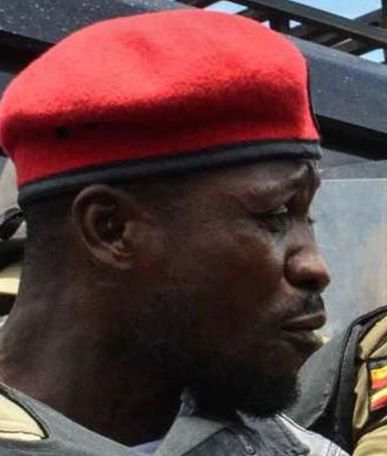 Bobi has not taken the smart talk lightly( Mwenda’s points); he has decided to ship his family abroad so that maybe he doesn’t have to cry before his family when he looses the polls which is a must.

He has now defended his decision of shipping out his children after critics questioned his move that was seen as a sign of cowardice.

Others have interpreted it that he allegedly wants to cause chaos through demonstrations and fells that his family will be safe when abroad.

NRM national leaders who spoke to the Eastafricanwatch.net said it is a must that Bobi will lose and that his actions are in a panic mode.

Bobi moves with hooligans, they may not be registered voters and he lacks national structures like what NRM and FDC parties have, so he will lose miserably ” another NRM supporter said.

They however accepted that he has some youths who love him especially that they are the same generation and that he is a good musician.

Some people in Kampala said its unfortunate that Bobi ships his children abroad and wants their children to get involved in illegal violent demonstrations which endanger them.

“Bobi should know that we love our children and people and can not allow them to demonstrate for him when his children are enjoying sausage abroad”  one Kimela said.

Ugandan Presidential candidate Robert Kyagulanyi, said he was forced to take his children out of the country after he received credible information that there was a plan by his opponents in the ruling party to kidnap them as part of a scheme to coerce him out of the race.

“I received credible information of pending physical attacks on my wife and [the] kidnap of our children,” he said, revealing that friends living out of the country had reached out and offered to host his children until the situation returned to normal.

“My family has been a target since I declared my intention to take on President Museveni three years ago. I decided to yield to the requests from my friends abroad and ship my children out of this danger zone because they are minors and not voters,” he said, while challenging the regime in Kampala to engage him and not his children.

“My focus is to ensure they don’t kidnap the minors and try to use them to coerce me into subjugation!”

Mwenda a veteran journalist and Managing editor of Independent Magazine also last month said that the Kira Municipality MP Ssemujju Nganda and other opposition politicians in Uganda are not better than President Yoweri Museveni.

He then said Ssemujju and all opposition politicians fighting to remove President Museveni from power have nothing much or better to offer only want to come and have self-aggrandizement.