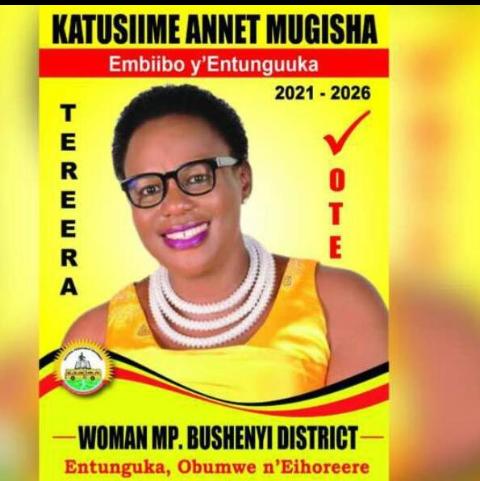 The Minister for General duties in the office of the Prime Minister Mary Karoro Okurutu is no longer at ease. Why her bid to seek re-election for the Bushenyi district Woman Member of Parliament seat for 2021polls may crash.

This follows to much competition from Mrs. Annet Katusiime Mugisha a teacher by profession, Social worker as well as a business Woman.

Katusiime is one of the funders of Bamugisha Community Welfare Ltd a company she started with her husband Eng. Dr Silver Mugisha the Executive director of National Water and Sewerage Corporation (NWSC).

She is also said to be a Counselor, social, gentle and very generous to the constituents and has traversed the district for around six years engaging in community development work and as well political consultations.

And as a result of her engagements in activities such as weddings, religious events and burials among others she has become a house hold name in Bushenyi making it very difficult for Karoro to win again.

“Bamugisha Community Welfare Ltd is a household name, why it has solved people’s community challenges and continues to help the people of Bushenyi” said Allen Kemigisha

Katusiime’s teams is thorough where they have stepped in Bushenyi probably causing the minister Karoro to slow down her presence in the district.

Karoro who could not be reached for comment about her re-election bid, is busy in Kampala where she has been serving on the National Covid:19 Task force.

But her supporters said they will fight on and can not just give in the seat to Katusiime. The competition between the two will be the biggest political fight that the district will witness in the recent past since businessman Haji Bassajabala Hasan has reportedly thrown his support to the minister.

“We shall not just to lose, we shall fight to the last minute for Minister Karoro” Karoro’s supporter stated.

Karoro’s challenge is that Katusiime’s moves and work towards helping people has been stronger than her efforts and consistently for some years and when she could not match her opponent she decided to withdraw from the district.

Karoro’s opponent (Katusiime) has the economic muscle and seems to have prepared and deployed strong and winning political strategies that might crash Karoro’s political career.

Katusiime has helped youths to starts income generating projects, some connected to jobs both in Uganda and the lucky ones abroad in UAE which things among others have endeared her to the voters.

“We think Katusiime and Byamugisha have been sent to Bushenyi by God to serve the people and were are just waiting for the time to express this through voting both in the NRM party primaries and the  national polls later early next year.

“Our problem is not that minister Karoro is not well placed in government, she is but she has not used her various ministerial positions to serve the people of Bushenyi. So enough is enough with her contribution and she must leave for others to contribute” another Bushenyi voter stated.

Mrs. Katusiime Mugisha’s also started a SACCO; Bushenyi Bamugisha Community Welfare Beneficiaries SACCO which has scaled up its services in the district to avail capital to constituents who are members to engage in income generating projects to fight poverty.

It is said that the SACCO is fully registered and is a nonpartisan and has served all irrespective of their religious affiliation, tribe and political party. The SACCO has reportedly served close to 2000 people in Bushenyi district.

Also in the race is Eunice Kansiime.  Minister Karoro has represented Bushenyi district for more than two terms.