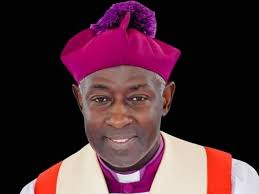 An Anglican parish on the outskirts of Kampala, the capital city of Uganda, has been demolished by court brokers who invaded the church premises last night.

City dwellers woke up shocked at the action that was that was guarded by the Police and other security operatives in the dark as people stayed home in respect of the Presidential directives of curfew.

The church Premises had earlier on been besieged by police which even refused the parish priest and area Bishop access to it.

When the area diocesan Bishop, the Rt. Rev. Wilbeforce Kityo Luwalira attempted to enter the Church on March 9th he was refused entry by the police. “I condemn those trying to destroy the house of God,” said Bishop Luwalira.

St. Peter’s church, located in Ndeeba village has been having a court dispute over this land with a Ndeba based businessman only identified as Dodovico, alias Dodo. He is said to be having a motor garage and repairs vehicles for well conected people in the government who use him or support him do wrong things and to break the law.

Dodo’s agents first razed down St. Peters Primary school around March this year. But government stopped land transactions and evictions during the shutdown.

Church lay leader Robert Salongo Seunjogi, said that as far as he knows the land on which the church sits belongs to the Anglican Church of Uganda. “I call upon all Christians of this church to keep calm. I assure them that we are the rightful owners of the land because we have the land title.”

Area MP, Paul Kato Lubwama has condemned the actions of the Police and the court that issued the eviction order. The court made a mistake issuing the eviction order without ascertaining the true owners of the land,” he said.

The mayor of Kampala, Erias Lukwago had promised as a lawyer would fight to protect the church from being demolished. “I will work with the Church of Uganda lawyers to ensure that the eviction order is cancelled, he said then.

Several city dwellers are still shocked that Dodo and his agents in governments could dare to attack the church.

The school was founded by Namirembe Cathedral to provide education for children from poor families. It has been in existence for the last 49 years.

The Most Rev. Stephen Samuel Kaziimba Mugalu is the Archbishop of the Church of Uganda.

Mean while MP Nambooze Bakireke Betty woke up to post on her face book page the message bellow;

What a big attack on society!
Some people are so callous…..Demolishing a Church….To evict God the almighty and you take that money to feed your family?!

For starters, Church of Uganda Christians have woken up this morning to find the St Peter’s Church demolished!! I understand that a Ugandan called Ddodo under the protection of government security agencies is the one who has done this….God Lord, Uganda need salvation.