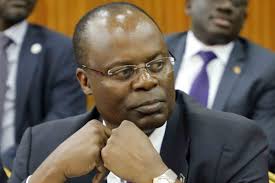 Dr. Louis Kasekende is still deputy governor Bank of Uganda (BoU) and that his contract is still running according to the central Bank.

He however did not state when the contract will end but explained that “Please be advised that the entire process starts and ends with the appointing authority”.

Kiyingi also stated that Dr. Kasekende is still deputy governor Bank of Uganda until the appointing authority appoints his replacement.

Sources at BoU indicated earlier that Dr. Kasekende would hand over office today after serving the central Bank for the last 33 years. So since there has not been an appointment no hand over has been conducted today.

What is the procedure for filling the position of Deputy Governor?

“For any person to qualify as Deputy Governor, professional competences and experience are considered as stipulated in Section 27 of the Bank of Uganda Act. The decision is the prerogative of the appointing authority and the appointments committee of Parliament” Kiyingi added.

Meanwhile a certain Professor working with a top government University has been rumored to be appointed next Deputy Governor.

President Museveni has not renewed Dr. Kasekende’s contract, he has been busy in the jungle trekking with Bazzukulu where has walked over 100 kilometers. President Museveni’s Photo is bellow. The Finance Minister Matia Kasaija told The New Vision recently that “he could do nothing about Dr. Kasekende’s contract” as the matter is before the president.

“I cannot act either way without the president giving me a blessing. Ideally, the president is the minister of Finance,” Mr Kasaija was quoted by The New Vision.

Dr. Kasekende served in different capacities before rising to the position of deputy governor in 1999.

In 2002, he left the central bank to serve at the World Bank before returning to occupy the same position.

Dr. Kasekende holds A Bachelor of Arts Degree of Makerere University, Diploma in Econometrics, Masters of Arts and PhD in Econometrics of the University of Manchester. He has authored several articles in academic journals and books.